The Simplest Human Brain Anatomy Representation I’ve Ever Come Across 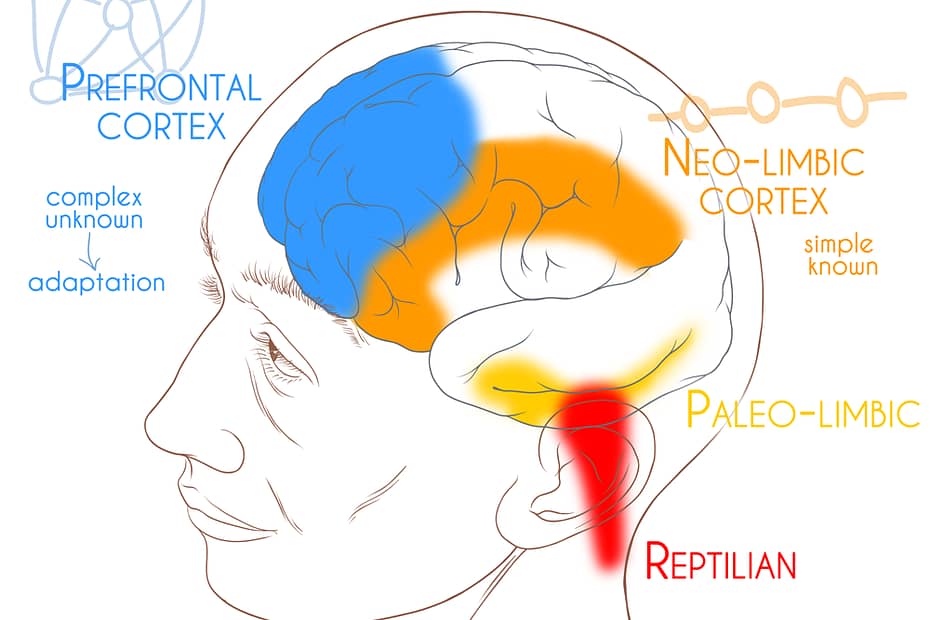 What if I told you that there are more connections in your brain than there are subatomic particles in the universe?! This is what Gerald Edelman, the Nobel prize winner, claims.

Our brain is a fascinating organ many are curious about. Unfortunately, understanding it’s operating mode is not accessible to most of us. Remember, it’s one of the most complex systems in the universe.

INC, Institut de NeuroCognitivisme, a French institute running neurological & behavioral research & training proposes a simplified model. I had the opportunity to get exposed to it back in 2012. After 2 years of training here is a condensed summary of what I’ve learned.

This is a quick read article for a non-expert audience aimed at unpacking the functions of the different layers of the human brain. By the end, a quick example of the impact on our behavior is presented.

We find hierarchies everywhere in nature. In human societies, across species in the food chain… and in our brain layers! Some parts get privileged access to nutrients and oxygen and others get the leftovers.

Simply put, our brain is composed of 4 layers. All 4 are responsible for our survival, each one in a different manner.

1. Reptilian: responsible for individual survival. Managing vital processes and 3F stress response (Freeze, Fight, or Flight). This is the most ancient part of the brain hence the most primitive. We have it in common with most other species including (primitive) reptiles.

2. Paleo-limbic: this part of the brain is responsible for survival within a group. It determines the herding behavior. It’s mainly a mechanism of domination and submission that organizes the group in the absence of elected authority. Herding behavior is important to organize the society answering questions like who eats first the pray (privileges)? Who protects the group against attacks (responsibilities)?…

3. Neo-limbic: that’s where our experiences are stored in the form of events, values, information, mental images…

4. Prefrontal cortex: the thinking brain. It’s the most recent one in evolution and also supposed to be exclusive to humans. Our prefrontal lobe function is to plan ahead and hence increase chances of survival compared to other species.

And as you may have guessed, the nutrients and oxygen prioritization follows the same order as the above formula.

To put things in perspective, the prefrontal cortex is the most evolved (and recent) part of your brain. It’s highly sophisticated yet, more ancient parts of the brain get the upper-hand.

As Jordan Peterson puts it:

Let’s consider the following example. You are on a street photography trip. You are about to capture a rare ambiance when a pedestrian walks aggressively towards you. He frowns, showing his miss-contentment. As he gets closer, he starts shouting.

When we get angry:

… Taking a deep breath is most often useful; it provides enough oxygen to everybody (every brain layer), the leftovers become sufficient. The time elapsed while breathing is also crucial as it gives enough space to System2 to ignite. We progressively recover control over our emotions and hence are able to better react to the situation in a civilized vs. primitive manner.

The above example is a simplified (or simplistic) illustration of our brain hierarchy at work. It allows putting in perspective some of the (miss)behaviors we witness daily.

PS: neurology is a very dynamic field. Maybe part of this article was proven wrong while you were reading it ☺. I make my best to maintain it current but if you have any new perspective please share it in the comment section. Don’t forget to link to the scientific article you are referring to ☺.